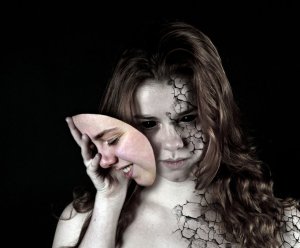 Those four photographs all exploit the idea of mask wearing and the relationships among the mask, the person, and the connection between these two.

The first photo shows a man who already wears a gorgeous mask is still drawing heavy eye lines, which explains the reason why he is wearing that–to make himself more beautiful, more honorable, more, like someone he is not. That kind of gives the connections between the mask and the person.

The second photo shows a woman who is holding a mask and taking off it. The mask is a happy face with big smile while she appears a sad face hidden behind. The contradiction suggests that the mask tend to hide the negative part of her while shows the fake positive part of her.

The third photo shows a woman taking off her healthy complete mask and reveal the frail, sensitive, broken part of her. It tells the person herself of being frail and sensitive, and also tells the fact that she tends to hide that true part.

The last photo show a woman with a mask saying HAPPY all over while labeling PAIN on her face.

This entry was posted on Tuesday, April 23rd, 2013 at 7:11 pm and posted in Uncategorized. You can follow any responses to this entry through the RSS 2.0 feed.
« Project 5 Brainstorm
Plans for project #5 »

This WordPress.com site is the bee's knees

A blog for my photography class